Facebook is on a roll – the rate at which it is introducing new features is mind-blowing.

Here are the main new things to watch out for:

A recent study from CEO.com showed that the leaders of today’s most powerful companies (aka Fortune 500) still see social media as a non-necessity in their leadership toolkit. In fact, 61% have no social media presence whatsoever.

This is totally anti-cyclical to consumers. Today there are more than 3 billion people on the internet and 2 billion are active social media users. We spend almost 3 hours online a day and 74% of consumers rely on social media to make buying decisions. So if social media is where your customers are, why aren’t there more CEOs active on social platforms?

The business of business are relationships. Relationships are inherently social. And leadership in the 21st century is all about strong communication. Social media provides multiple benefits for CEOs: it creates emotional connections, builds relationships and demonstrates innovation. Little side benefit: all of these increase leadership effectiveness.

A recent Weber Shandwick study said that 80% of employees would rather work for a social CEO. And 3 out of 4 consumers said they would be more likely purchase from companies who communicate on social media.

And we should not forget trust. Trust is the foundation for any business to operate. Be it internal or external, trust should be high on any CEO’s priority list. Edelman’s yearly Trust Barometer highlights exactly this. With more people placing trust in their peers and company employees than CEOs, social media provides a perfect channel for changing this. In today’s media landscape, there needs to be a move from just traditional media to a platform where CEOs can directly interact with stakeholders and customers. Richard Edelman defined the new role of the CEO to be the “Chief Engagement Officer”. A CEO that has a social profile can result in better communication, more transparency, higher employee morale and an improved brand image. By sharing stories, vision and values, the CEO moves from being just a business figure to a real person – resulting not only in greater visibility and influence, but also in more trust.

So Many More Opportunities

CEO.com’s study showed that those CEOs who are “active” on social media, Linkedin and Twitter were the preferred platforms of choice, although most of them were less active on the latter. With so much happening in the social media space, it will be interesting to see when executives will realize the benefits of exploring  other platforms.  Such as visual platforms like Instagram or YouTube. Personally, I also strongly believe that messaging and streaming apps will be interesting for CEOs to experiment with as these channels are genuinely social with their feedback mechanisms and their informality.

But when looking at today’s social CEO landscape, all this still lies in a very distant future.

Maybe for now it is sufficient for CEOs take some advice from Sir Richard Branson, who said, “Embracing social media isn’t just a bit of fun, it’s a vital way to communicate, keep your ear to the ground and improve your business.” 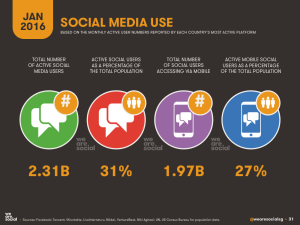 I always suck up this report on digital, social and mobile usage around the world which is seeing ever faster growth.

The key statistics for digital, social, and mobile media in 2016 are:

This means more than half of the world’s adult population now uses the internet, and (something exciting for me) that well over one-third of the adult population uses social media at least once a month.

It is also interesting to see – just like I was telling the audience at this week’s ISPO Communication Day – social media is moving from broadcasting to being social. It is all about connecting, personalization and providing true value. This will mean a big change for us marketeers! We will need to activate our listening skills, understand what our audience truly wants and well yes…become social.

The full report can be found here:

Mary Meeker’s State of the Internet presentation gives us a great insight into the Future of Digital – albeit in a 164 page slideshow. Here are some takeaways that I find the most interesting:

And to conclude: the future of the Internet, in one graph, showing screen time by screen type around the world.

Back in October I wrote a post about how incredulous I found it that Lance Armstrong and his PR machine had gone silent. Three months later and he is sitting on the couch opposite the queen of confessionals.

That he admitted to doping last night only confirms what we have long known.  And maybe it was also astonishing to see a man who for years was the top of his game now forced to admit it was all a lie and that he was an arrogant bully. But  there still are many questions open and while this may be Lance’s first step to rehabilitate his toxic image and tarnished brand, him and his people will need come up with more to put him back on the celebrated hero track.

It did not surprise me when at the end of August Lance Armstong declared that he was no longer going to fight against the doping charges against him. I had always believed that he had not been honest with the world. Who can forget that Tour de France where he climbed the mountain, looked back at the field, grinned  and  rode off – at what seemed to me – enormous speed? That is usually reserved for  Marvel Superheroes.

As a trained lawyer I strongly believe in “innocent until proven guilty”. So all these years I have acknowledged his brilliance at creating this amazing personal brand – not only about his own persona but also his charity. It seemed to keep all those speculations against him at bay. It was the best defense against anyone accusing him of being a cheat.

But what is perplexing me as a communications professional is  now that he has been stripped of his titles, his sponsors have dropped him and he will never be able to race again what has happened to that well-oiled PR machine that we have known to be Lance Armstrong? It has gone silent.

Going silent in a crisis is like the 101 of PR mistakes. It cannot get worse. So come out. Say something. Anything. And move on.